What most distinguishes the Devonian Period is an explosive evolution of the oceanic fish fauna. Nearly all the fish that are ancestors of modern fish species evolved during this period.

Within the various groups of fish, some species lived in fresh water while others lived in salt water.

The first fish species had no jaws or teeth, and thus could not be predators. They sucked in nutrients from bottom sediments or filtered food from the water. They could also live as parasites, attaching themselves by suction to host animals.

Porapsis, a jawless fish without teeth. Probably sucked nourishment from the bottom sediments. Outcompeted during early Devonian by fish with jaws and teeth.

In the period preceding the Devonian, the Silurian, there were already fish with teeth and flexible jaws. They could swallow large prey and came to dominate the oceans during the Devonian.

The first vertebrates with jaws were placoderms (armoured fish). They had no teeth, but their jawbones had sharp edges that could cut flesh.

After jaws came teeth. That development occurred in placoderms during the same time as in other fish groups such as sharks, bony fish and the now-extinct Acanthodes (spiny sharks).

Today, fish with teeth and jaws predominate. Of the circa 30,000 known fish species on Earth, only 200 lack jaws. 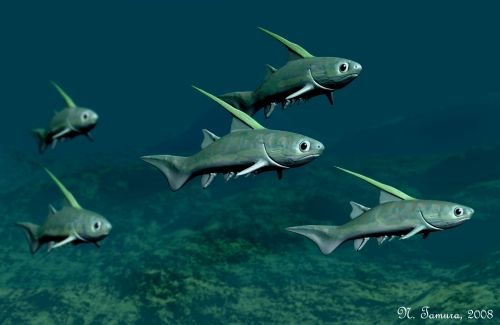 All of the oceans' top-level consumers – the predators that came last in the food chain and had no natural enemies – were now fish. The largest species of all was Dunkleosteus, a placoderm that could be up to five metres long and had knife-sharp bony structures in its jaws. 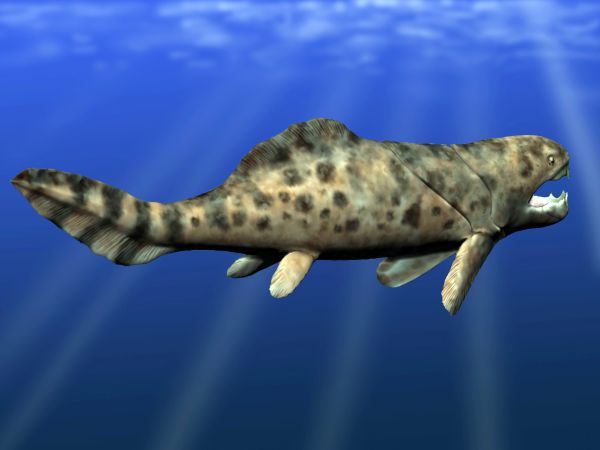 At the close of the Devonian Period, there was a drastic reduction in the level of carbon dioxide in the atmosphere. This in turn resulted in lower temperatures, since carbon dioxide is a “greenhouse gas”. It is not known why this change occurred.

The lower temperatures led to a series of extinctions over a period of some three million years. First to decline in the oceans were bottom-dwelling organisms. Next to be affected were organisms in shallow ocean waters, and finally plankton. Placoderms (armoured fish), corals and many trilobites were among the animals that become extinct.