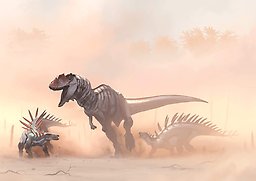 Chungkingosaurus, up to five metres in length, was one of the smallest stegosaurs.

There were probably two rows of upright plates and sharp spikes running down its back and tail, and more special spikes at the end of the tail that were used for self-defence.

Like all the other stegosaurs, Chungkingosaurus was a herbivore. Since it had a narrow head with a hard beak, it was presumably able to reach plant parts of high nutrient value, such as the cones of palm-like cycads.