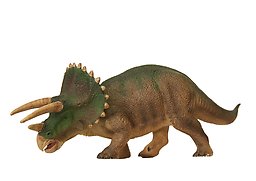 Triceratops walked on all four legs and was about eight meters long. Triceratops nipped off pieces of plant with its parrot-like beak. It chewed food with its specialized molar teeth, unlike many other dinosaurs, which swallowed their food whole.

The horns were probably used during fights and for defense. The collar may have protected the neck during these the fights, but it may also have been used for visual display. One individual has been found with a healed wound on the head received from the bite of a Tyrannosaurus rex.

Triceratops probably lived in herds and may have moved with the seasons.