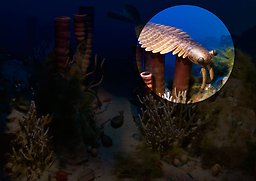 The genus Anomalocaris includes the largest known animal from the Cambrian. Along the sides of its elongated body were finlike flaps, used for swimming. On the head were two large eyes and two curved frontal, arm-like appendages, with claws and spines used for catching and holding prey. Since the unusually shaped, circular mouth was on the underside of the head, it is not entirely clear how Anomalocaris ate its prey, which may be assumed to have comprised worms and other soft-bodied animals.

Anomalocaris was only partly an arthropod. It had developed a segmented shell on its frontal appendages but the rest of the body was soft, as in the arthropods’ ancestors. 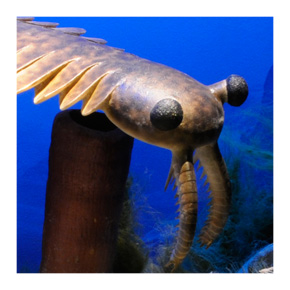