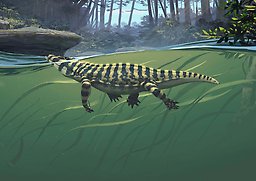 Eryops, nearly two metres long and weighing some 90 kg, was one of the largest tetrapods in the early Permian period. Since it was a slow mover in the water it would lie in wait, motionless, for its prey.

The position of the nostrils and the large eyes show that, in hunting, they were above the water surface like those of present-day crocodiles. Eryops presumably had few enemies.

Eryops was better adapted to a terrestrial existence than its ancestors. This may be seen from its robust skeleton and the extremities, which were strong enough to bear its weight when it walked on land.

Why is one digit a different colour?

Eryops used to be thought to have five digits on each hand and foot, but new fossil finds show it had only four digits on the hands — just like all amphibians living today. The old model you see here has the imagined fifth digit marked in another colour. 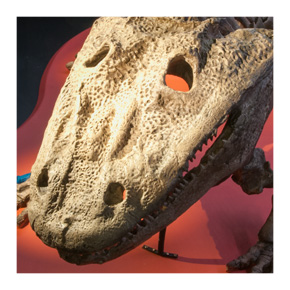