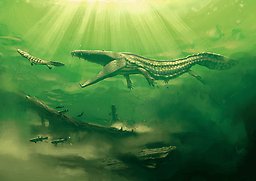 Mastodonsaurus giganteus is one of the largest known amphibian species (as the name implies): up to six metres long, with a skull of more than a metre. The body and tail were relatively small in relation to the huge head.

Mastodonsaurus lived in marshy waters and fed mainly on big fish and other large amphibians like Gerrothorax, but also terrestrial reptiles that ventured down to the water’s edge.

Its jaw bore many teeth and two large tusks on the tip of the lower jaw. When the jaw was closed, the tusks protruded through openings in the skull. 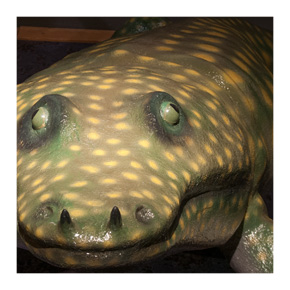