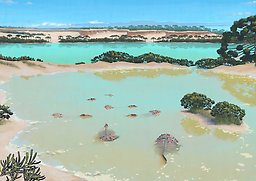 Gerrothorax lived all its life in water. Like its relatives Eryops and Mastodonsaurus, it was a predator.

Gerrothorax had a markedly flattened head and body. The front and back limbs were not strong enough to support the body on land. This amphibian lurked in muddy water and found its food by using its big, upturned eyes.

In catching prey it raised its skull like the lifting of a toilet lid (rather than dropping the lower jaw like most other vertebrates). Its mouth contained rows of sharp teeth and there were fangs in the roof of its mouth.

Gerrothorax breathed using gills, which protruded outside the body like those of tadpoles. 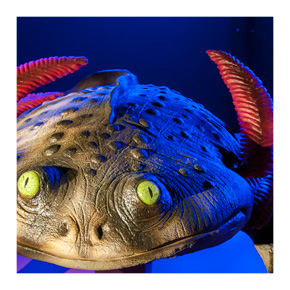